"In the 1970s, legendary creator Jack "The King" Kirby revolutionized the comic book medium with a sweeping multi-series saga called THE FOURTH WORLD. Encompassed with impossible new worlds, iconic new characters and sweeping new mythologies, its debut elicited unprecedented levels of excitement and anticipation from comics readers everywhere. In honor of this extraordinary talent's centennial, DC Comics is proud to present an all-new edition of this towering achievement in graphic literature. THE FOURTHWORLD BY JACK KIRBY OMNIBUS collects, for the first time in a single hardcover volume, Kirby's complete chronicles from the pages of SUPERMAN'S PAL, JIMMY OLSEN, THE NEW GODS, THE FOREVER PEOPLE and MISTER MIRACLE, as well as the climactic graphic novel THE HUNGER DOGS. This transformative tome also includes illuminating essays from acclaimed author (and former Kirby apprentice) Mark Evanier and celebrated comics talent Walter Simonson, as well as a special section of Kirby pencils, profiles, pinups and more!"-- 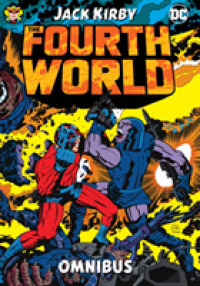