For nearly four decades, David Sedaris has faithfully kept a diary in which he records his thoughts and observations on the odd and funny events he witnesses. Anyone who has attended a live Sedaris event knows that his diary readings are often among the most joyful parts of the evening. But never before have they been available in print. Now, in Theft by Finding, Sedaris brings us his favorite entries. From the family home in Ralegh, North Carolina, we follow Sedaris as he sets out to make his way in the world. As an art student and then teacher in Chicago he works at a succession of very odd jobs, meeting even odder people, before moving to New York to pursue a career as a writer - where instead he very quickly lands a job in Macy's department store as an elf in Santaland...

Tender, hilarious, illuminating, and endlessly captivating, Theft by Finding offers a rare look into the mind of one of our generation's greatest comic geniuses. 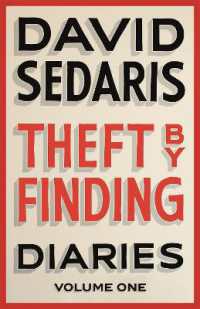 From bestselling author David Sedaris, the diaries that are the source of his remarkable autobiographical stories.