THE FIRST AND ONLY AUTOBIOGRAPHY FROM REAL MADRID GALACTICO AND WORLD CUP SUPERSTAR LUKA MODRIC. 'Enthralling.' - Oliver Holt, Mail on Sunday 'Awesome' - Match Magazine 'Solemn, soulful and occasionally romantic' - Alyson Rudd, The Times 'an illuminating insight into the career of one of the greatest players in the modern game' - Late Tackle 'On a level with the great midfield players of the last 20 years.' - Sir Alex Ferguson, CBE For the first time, Real Madrid galactico and Croatian legend Luka Modric tells the story of his journey from a childhood in his war-torn homeland to becoming a serial UEFA Champions League winner and one of the most celebrated footballers in the world. Regarded as one of the great midfield players of the last 20 years, Luka reveals the difficulties of growing up during the Croatian War of Independence and his beginnings as a footballer. The FIFA World Cup finalist sets the record straight regarding key moments at Dinamo Zagreb, Tottenham Hotspur and Real Madrid; he gives us intimate insights into his treasured home life; and he brings us his personal account of his career peak - Croatia's dramatic path to the 2018 FIFA World Cup Final. What were his thoughts during decisive matches? What was his relationship with key players and coaches? What is the inner determination that keeps him on the pitch? What does it take to become the best footballer in the world? Luka was consistently underestimated in his early career, but through grit and determination he has defied the expectations of everyone who doubted him, and reached the ultimate heights of world football. This is Luka Modric in his own words. 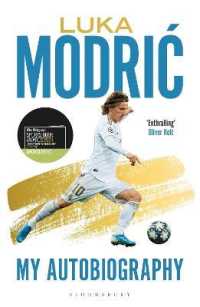