Women are the Future of Islam -- Hardback [Hardcover]

The future of Islam is female Named one of the BBC's 100 Women of 2016, and the subject of interviews in both The Times and the Guardian, Sherin Khankan is one of the very few female imams in the Western World. In addition she has founded the first mosque for women in Europe. In this urgent manifesto this remarkable woman challenges the idea that Islam should be defined by masculinity and conservatism. In her revelatory book, she addresses urgent contemporary issues, such as the place for modern women in Islam, fundamentalism, radical Islamic groups, Islamic divorce, Sufism, and describes her own personal journey as a female Muslim activist. Women Are The Future of Islam shines a feminist light on a gentler, more inclusive, more liberal - but also fully engaged - side of Islam that we rarely see in the West. It's an eye-opening, highly topical read. 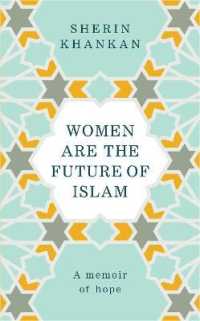