Alan and Pina have lived in isolated Boney Point for thirty years. Now they are dealing with Alan’s devastating early-onset Alzheimer’s diagnosis. As he is cast adrift in the depths of his own mind, Pina is left to face the consequences alone, until the arrival of a flock of black cockatoos seems to tie him, somehow, to the present.

Nearby, conservation biologist Arianna Brandt is involved in trying to reintroduce the threatened glossy black cockatoos into the wilds of Murrungowar National Park. Alone in the bush, with her birds failing to thrive, Arianna’s personal demons start to overwhelm her and risk undoing everything.

At first, when the two women’s paths cross, they appear at loggerheads, but are they ultimately invested in the same outcome, even if for different reasons? Rain Birds is an accomplished and unforgettable novel examining personal tragedy as set against global and environmental responsibilities, and how we negotiate our often-conflicting ideals. 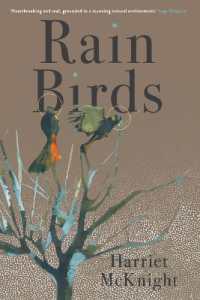 When Arianna's personal demons start to overwhelm her and risk undoing everything, an unexpected connection changes the course of her life.